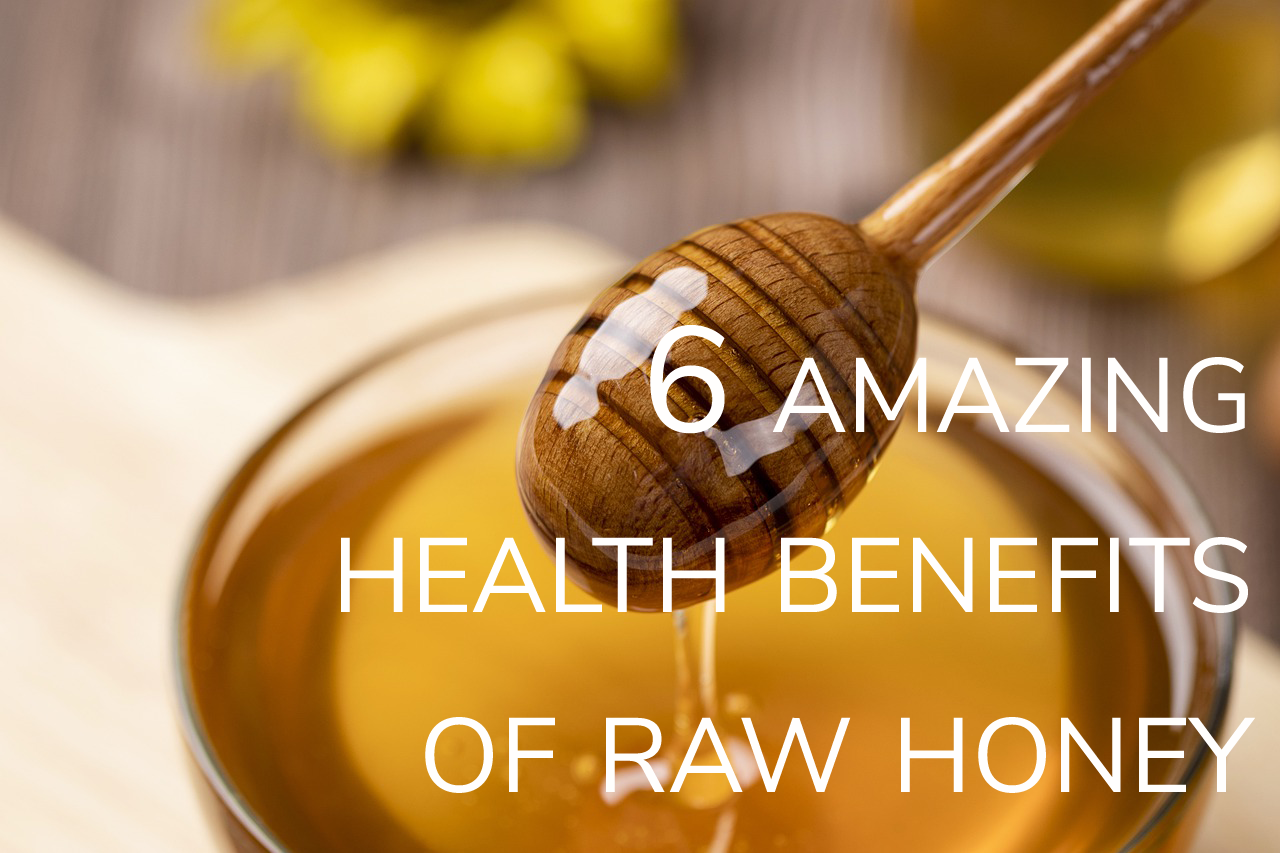 There’s a lot of buzz around raw honey and all the healthful properties locked into Mother Nature’s finest golden gift. Let’s take a closer look at 6 amazing, research-backed benefits of raw honey.

But first, why raw honey and not just any general store-bought honey?

Raw honey is honey that was bottled “as it is in the hive”, without being pasteurized or heated, and may be unfiltered or slightly filtered to remove unwanted bee parts. Apart from that, the honey is never treated or diluted, meaning it’s as close to nature as you can get.

On the other hand, a lot of the honey sold in retail stores is pasteurized to kill yeast and delay crystallization; and ultra-filtered to be more presentable (cloudy honey doesn’t look as appealing as a clear, golden liquid, now does it?). Some mass-produced honey has even been found to be diluted with corn syrup!

Health and nutrition experts agree that raw honey is the more healthful choice between the two, because heating honey during the pasteurization process kills some of the beneficial enzymes contained in the honey, diminishing its healthful properties for humans. Ultra-filtering also removes bee pollen, propolis and other beneficial components from the honey.

Now that we’ve established what raw honey is, let’s jump straight into 6 of its amazing benefits.

1. It contains a wide range of nutrients and is loaded with healthful compounds

Raw honey contains several vitamins and minerals, which may vary depending on its origin. Generally, though, studies confirm that raw honey contains vitamins B1, B2, B3, B5 and C; along with minerals such as calcium, copper, iron, magnesium, manganese, potassium and zinc.

It is also packed with antioxidants and a wide range of enzymes and amino acids.

Not only is it packed with a wide range of vitamins, minerals, enzymes and other micronutrients, it is also naturally full of sugars which are rich sources of energy.

Thanks to its high fructose content, honey has a glycemic index (GI) of 58, which means it has a more moderate effect on changes in blood sugar levels than normal table sugar – so it won’t lead to a sudden “crash” in energy.

Because of this, research even suggests it may benefit people with diabetes as a healthier alternative to normal sugar.

3. May reduce the risk of chronic diseases and help fight ageing

However, an imbalance of free radicals and antioxidants (called “oxidative stress“) is thought to be linked to chronic diseases such as heart disease and even some cancers. Scientists also think it could play a role in ageing as well as the development of conditions such as Alzheimer’s disease.

Raw honey is absolutely packed with antioxidants, including flavonoids and phytochemicals, which help fight against free radicals and can contribute to reduce the risks associated with oxidative stress. 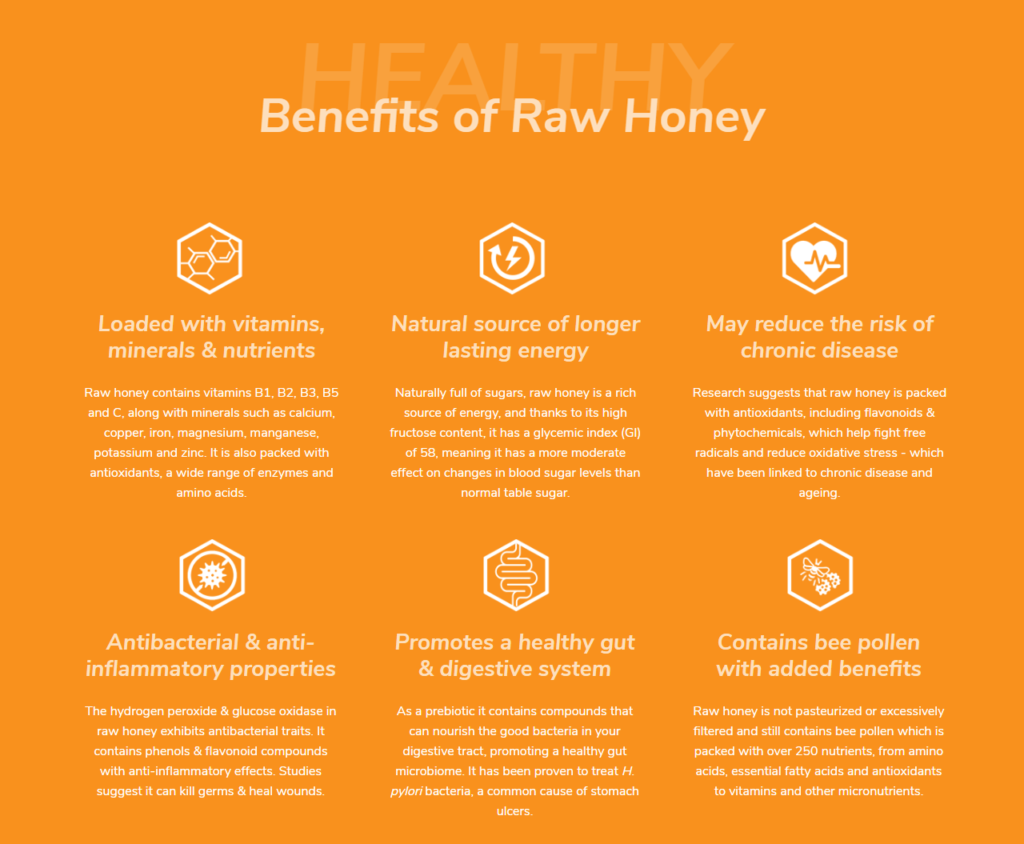 4. It is a natural antibacterial agent and an effective anti-inflammatory

Raw honey contains hydrogen peroxide, an antiseptic, as well as glucose oxidase, which is an enzyme that exhibits strong antibacterial traits. Together it lends to honey incredible antibacterial and antimicrobial properties. It also contains phenols and flavonoid compounds that are responsible for anti-inflammatory effects.

Numerous studies suggest that these properties make raw honey an effective wound-healing agent that can kill germs and may aid in tissue regeneration. In fact, honey has been used as a traditional remedy for infections and wound dressings since ancient times.

5. Promotes a healthy gut and can help for digestive issues

Despite being antibacterial, raw honey is also a prebiotic – which means it contains compounds that can’t be broken down by the human digestive system, but are an excellent source of nourishment for the naturally occurring good bacteria found in our digestive tracts. Prebiotics like honey promote a healthy gut microbiome.

Raw honey has also been proven to effectively treat H. pylori bacteria, which is a known common cause of stomach ulcers and chronic gastritis.

Heating and ultra-filtering removes beneficial bee pollen, propolis and a lot of other nutrients from regular honey found in most retail stores.

Raw honey, however, hasn’t been heated and is not excessively filtered, meaning it still contains all the goodness from the hive.

Bee pollen is packed with over 250 beneficial substances, from amino acids, essential fatty acids and antioxidants to vitamins and other micronutrients. It may make your raw honey a bit cloudy, but it’s definitely worth it!

To conclude, research suggests that raw honey is not only loaded with nutrients and antioxidants, but is also an antibacterial and anti-inflammatory agent that offers many incredible health benefits and may aid in a lot of natural processes in the human body.

There remains a lot of research to be done to conclusively crown raw honey as superior to processed honey, but what these science-backed findings suggest is that the old anecdote of “the closer to nature, the better” may certainly be true of honey as well.

Welcome to the hive!

Join us on a journey into the world of honey with interesting articles, recipes and helpful honey-hacks. Just click on a category below for more!

Bzzz Bzzz (It's how we talk)

Bzzz Bzzz (It's how we talk)